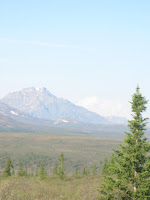 “If you can find a path with no obstacles, it probably doesn’t lead anywhere.”
Frank A. Clark

The highest peak in North America at 20,320 feet, and it was our good fortune to actually see Denali, which is 17% glacier. The “great one” is typically visible only 30% of the time. Wow! It could be the ultimate wilderness experience. Definitely larger than life. 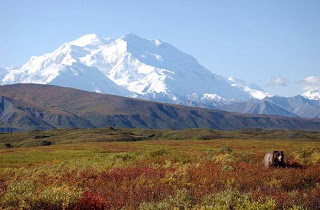 Wildlife abounds. The park is so huge, there is no need for the animals to come in contact with humans, but we did get a glimpse of some of the “natives.” 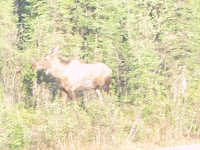 The Nenanna River, which flows north eventually reaching the Bering Sea, courses through the park. This is a braided river characterized by glacial silt, which forms ever-changing channels. 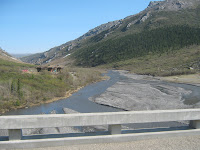 So how did anyone actually find this pristine wilderness? Well, Harry Karstens first came to the Klondike territory in 1897 in search of gold. He migrated down the Yukon River into Alaska in his quest. He gained attention as a pioneer in Alaska helping to haul supplies for the U.S. Army and building a telegraph line to link various isolated Alaskan outposts.

In 1906 Karstens guided a hunting/fishing trip along the Toklat River for naturalist Charles Sheldon. Sheldon was captivated by the beauty of the wilderness. He returned for longer periods. Establishing a camp became a goal. The road building process just to access the camp was arduous, and that was just the beginning. Getting fresh drinking water presented its own dilemma. They built a cabin for protection from the elements, and Savage Camp, the first hub in this untamed land, was born.

Sheldon recognized the importance of preserving this sanctuary. He persisted and lobbied Congress for 10 years to safeguard this natural masterpiece. In 1917 Sheldon’s vision finally became a reality, and Harry Karstens was named the first superintendent of the park serving from 1928 to 1939.

In 1928, President Theodore Roosevelt confirmed that the US should preserve this “great wonder of nature.”

What's in a name? Is it Mt. McKinley or Denali, “the high one” in Athabascan? Either way, you’re right. In 1895 a reporter called the mountain Mt. McKinley honoring William McKinley, who by the way, never set foot in Alaska. First nation people thought Denali a more appropriate name, and in 1899 it was called Denali. No matter what you choose to call it, there is nothing like it, and it is an amazing sight.

While in Denali, we were fortunate to chat with Carol Reid, a native Athabascan, who gave us an overview of the life of this First Nation people. She explained there are five tribes comprising the Indian population. In addition to her commitment to preserve Athabascan history and culture, Carol offered some interesting facts.

Did you know caribou antlers grow 1”/day until maturity at 40 lbs.? Natural predators of the caribou are grizzlies and wolves.

How about frogs that freeze in the ground in winter, reviving and thriving come the spring thaw?

I was a little surprised that Denali does not boast an extensive trail system. The wilderness is the real deal. Good news is that there are trails from the Visitor’s Center with great footing, views and even ice in June. What a nice opportunity to imagine the early explorers’ treks and experience the grandeur.

The Quest for Gold -- Ticket to a Better Life 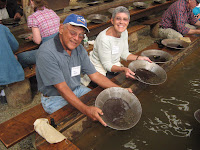 “Go confidently in the direction of your dreams. Live the life you imagine.” Thoreau

Although Alaska was mostly ignored by the US after its acquisition in 1867, the draw of gold brought more than 100,000 would be prospectors to the last frontier in search of a better life at the turn of the century. Many perished on the journey, and for many others gold was elusive. Consequently, the expression used today “didn’t pan out.” Robert Henderson reached Dawson City and steadfastly prospected for gold, in the end never staking a claim. However, on Henderson’s advice to prospect in Rabbit Creek, George Carmack with his hunting/fishing party, including his Indian wife Tagish Kate and her brother Skookum Jim, was the first white man to discover gold in the Klondike. He did stake his claim, and in the first season, more than $100,000 in gold was taken from this claim and the creek renamed Bonanza Creek. Controversy remains today as to who should be credited with the discovery. To learn more read “Klondike Fever” by Pierre Berton.

Do try your hand at panning for gold and learning the history of mining at the El Dorado Gold mine. You are guaranteed to find gold! http://eldoradogoldmine.com/ 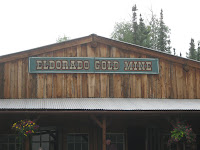 The stampeders were not necessarily as fortunate as we were. For us, the staff provided us bags of silt, pans and kept the water in the sluice boxes. It was fun, but our muscles were certainly aware of the stress of the panning process. I suspect the fun soon went out of the quest for the prospectors who shoveled and panned continually all day long with no guarantee of the results.

In gold rush days Skagway became a supply depot for prospectors. It was also known as a “hell on earth” with pitfalls for unwary miners.

Jefferson Randolph a/k/a “Soapy” Smith gained notoriety in Skagway as a con man/gangster. He moved to Skagway in 1898 and set up a telegraph office where the telegraphs did not leave the building.

His nickname evolved from his first con, the prize soap racket. Soapy would gather a crowd and using his well honed sleight of hand he wrapped ordinary bars of soap in $$$ bills, $1 to $100, which he then overwrapped with plain brown paper. He then sold the soap to the crowd for $1/bar. Of course, each and every bar was not a winner. However, a shill in the crowd would buy a bar, open it and wave money around, which further enticed the crowd to buy. Finally, he would tell the crowd no one had yet gotten the $100 bar, and he would auction the remaining soap to the highest bidder.

Soapy formed a well disciplined gang of shills and thieves. He was known as the “king of the frontier con men.”

He met his demise in a shoot-out in Juneau in 1898 after his gang robbed a Klondike miner in a game of three-card monte.

I was transported back in time as we rode the White Pass and Yukon narrow gauge railroad from Fraser to Skagway. http://www.wpyr.com/ 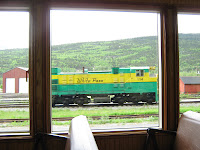 The hardships the early stampeders endured and their amazing ingenuity navigating the Yukon River and traversing Dead Horse Gulch, which witnessed the demise of 3,000 horses, to improve their fortunes boggled my mind. Each person setting out from the Yukon Territory where the treacherous White Pass and Chilkoot trails met were required by the Canadian government to have 1 ton of supplies to continue the journey to gold country to follow their dream. Just moving the supplies was overwhelming. Think about it, how much could one person carry at a time – 50 lbs./80lbs.? How many miles packing supplies before even starting to prospect for gold – sometimes 1,000 miles. http://www.arcticwebsite.com/goldrushsupplies1898.html 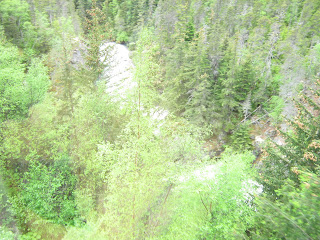 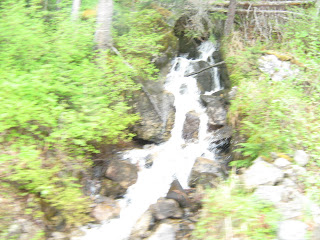 In the end no gold was found in Skagway, the closest claim being 550 miles north in Dawson City. I was saddened to think of all those naïve folks and their animals that died in the quest.
Posted by Alice Oldford at 5:26 PM No comments: