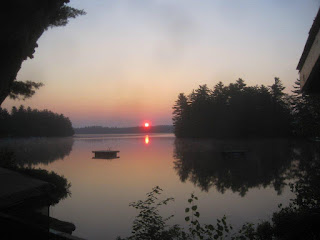 "A lake is the landscape's most beautiful and expressive feature.  It is Earth's eye; looking into which the beholder measures the depth of his own nature."  Henry David Thoreau
Camp in Mainespeak is a rather basic, usually seasonal cottage on a lake.  Goin upta camp is a summer tradition for many families from Maine and away.   Over and over I hear families are called year after year by the simple pleasures including swimming, boating and fishing.  Rainy days and evenings are filled with board games and puzzles.
Louisa Nevitt-Perdoni, a New Jerseyan, remembers going to camp at Mirror Lake, Oxford, with her 7 siblings starting in the late ‘50’s.   After making the trek to camp since the 1920’s, her family acquired a property and in 1952 built a Sears kit camp with 2 bedrooms, living area and kitchen + a front porch.
Camp life included bathing in the lake with ivory soap.  Drinking water was pumped from an unknown source.  There was no worry, and everyone drank it anyway.  An outhouse was the norm. 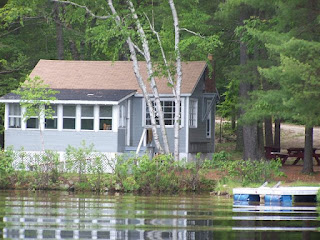 According to Louisa, family and friends were invited annually and “no one was every turned away.”  “We slept wherever we could fit,” she recalls.  Day trips to the White Mountains and other attractions were a special treat.  To her family camp was a “place to reconnect, life simplified, relaxing and easy.”  Although interest in camp waned when they became teenagers, the young adults with their own families have revived the camp experience.  Louisa’s family now maintains “Aunt’s Camp” and encourages the tradition and stability her family enjoyed.  TV offers 2 channels, and there is no internet connection.  Scrabble is the family game of choice.
For our son-in-law, Mainer Rick Strout, goin upta camp meant traveling from Auburn to Grandpa’s place at Sabbathday Lake.  He and his six sisters swam and fished, picked berries and cooked hotdogs.  They loved listening to stories around the campfire.  Rick never tired of hearing his great grandfather’s hunting tales of McGourty’s Swamp in Chesterville—about the hunt itself and sometimes about dodging the game warden.
There was no indoor plumbing at Grandpa’s, but there was a hand pump outside to pump water.  Although Grandpa had a big fireplace, there was no central heating system.
Rick says, “I love the smell of a camp.”  For him hearing the wooden screen door bang brings back memories.
Rick, who is a carpenter, converted a seasonal camp on the upper portion of Little Sebago to a year-round home for his family.
Rena, who lives in a newly built home on 20 acres in Skowhegan, maintains a camp a few miles away.  Her family’s camp is a geo dome, 28 feet in diameter.  It is all open with a loft and offers one bedroom and a bathroom.  Power for the camp is an example of Maine ingenuity.  It is connected to a 12 volt marine battery located in a truck outside with underground wires.
Rena’s family enjoys swimming, tv with local channels, cards, reminiscing and making photo collages to take home.  Rena says “The family connection is the key to camp life.”
My husband and I are new to the camp experience.  Being from “away” with children and grandchildren living in Maine, a lakefront vacation home seemed a good idea.  That was the beginning.
On a leisurely boat ride on Little Sebago, we happened on a handmade “for sale” sign in front of a typical camp.  Frankly, it was not my vision of a vacation home, but my son-in-law convinced me it was right to pursue.  Being a native, he made the first call to the owner, also a Mainer, to introduce me. 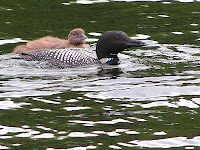 After a year of negotiation we had a contract.  The mortgage company underwriters doubted the wisdom of our purchase – the failing septic, no actual bathroom, no hot water, and no source of central heat.  We patiently explained there were 100’ of shoreline with a sandy bottom and gradual drop, and yes we knew what we were doing.  So in February 2006 we became camp owners, and we’re hooked.  We enjoy seeing and hearing the loons that frequent our cove.  My husband, John, reminds us on arrival to “relax, it’s camp.”

Today our camp includes a new well and septic, bathroom, hot water and Rinnai heater. We’ve added a round, stone fire pit, which is great for evening campfires or the lobster pot.
We rent our camp during the season, which to my surprise, is limited to July and August, and we have succumbed to the demand for cable TV and internet.  Games and puzzles as well as an assortment of books are available for everyone who wants to immerse in the camp experience. We do our best to retain the camp feeling/nostalgia of original knotty pine paneling, shaving mirror over the kitchen sink, linoleum on the bedroom floors – all included when the original owner built this camp in the 50’s. 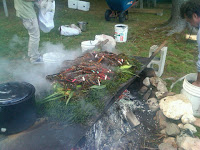 A favorite day trip is a visit to the Maine Wildlife Park in Gray.  There is always something new to see.  Last season we attended a wonderful program on eagles, and the star of the show was a young eagle that had been rescued after a storm on Little Sebago blew down the nest.
I asked one of our repeat tenants, Anne and Jack Marsh, what makes them return.  Although the Marshes only live in Portland, going to camp is vacation for them, a true getaway with few distractions.  Anne chooses not to bring her computer.   She says “Being at the camp draws our family together.”  The Marshes have twin 12-year old sons, who love the water and campfires.  On rainy days they play monopoly together for hours.
Among the boys’ favorite activities is fishing from the dock.  Anne, who was raised a city girl, learned to bait a hook and remove the hook.   Anne says, “the boys have become catch and release fisherman.”
We use Krainin Real Estate, established in the area since 1976 to handle our rentals.  I asked owner Maggie Krainin whether she heard stories from returning tenants.  She told me Krainin handles approximately 1200 rentals per year, and 56% are repeaters.  She said “Some folks always want the same property, and they develop a feeling of almost ownership.  They even bring additions to the camps like decorative items, books and games.”
Her rental agents have some funny stories to tell like the renter who complained about a squirrel in the cottage who was eating their Oreo cookies.  It seems the squirrel was not inclined to leave as long as the cookies lasted.
Another agent remembers folks who had asked their agent over and over whether there would be loons at the lake.  When they got there, they complained the loon calls were so loud, they kept the family awake.
Camp is not for everyone.  A Krainin agent remembers a lady arriving for check in wearing tight capris and 4” heels.  When a chipmunk ran out of the woods and under her car, the lady screamed “An animal!  An animal” and immediately put her child back into the car to avoid an animal encounter.
For those who love the simplicity of camp living, the campfires, relaxing on the shore or playing games on rainy days, camp is a treasured summer tradition.
As for us, we’re sad to close the camp in the fall, and we can hardly wait for the ice to go out on the lake in the spring so we can prepare for opening. 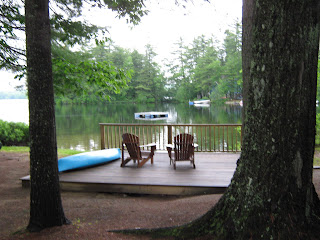